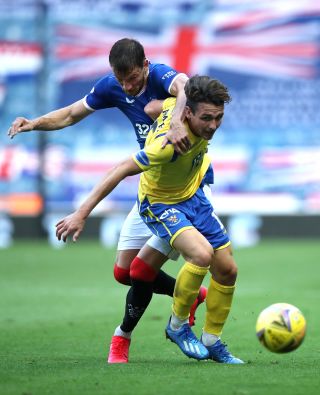 Borna Barisic is excited about Rangers’ flawless start to the Premiership season.

Steven Gerrard’s side have won three out of three since the start of the campaign without the concession of a goal as they prepare for the trip to Livingston on Sunday.

The 27-year-old Croatia international, who scored a wonderful free-kick in the 3-0 win over St Johnstone at Ibrox on Wednesday night, enthused about the impressive beginning the Light Blues have made.

He said: “Yes, I am excited about that. It is not easy to keep clean sheets for three games but it is just part of the job.

“We did very well, not only defensively but even when we go forward when we attack, we have scored seven goals. So I am very happy with that.

“We have confidence because of the good start but not only that, it comes from pre-season.

“We worked very well in training, it was 100 per cent and of course we get more and more confidence every game and that is very good for the next games.”

Barisic, who signed from Osijek in 2018, has received rave reviews for his performances so far this season but insists the team comes first.

He said: “I am very happy, a very good start to the season for me.

“But I am even more happy because of the team has started very well and we have kept clean sheet, nine points, three wins so I’m very happy.”

Barisic, however, is less enamoured with Livingston’s artificial surface.

He said: “It is different of course and I really don’t like a plastic pitch.

“For me, that is not for the top league teams but the situation is we have three of them (Hamilton and Kilmarnock as well) and we need to adapt.

“I have already played there for the last two years. It is different but as I say, we are used to playing there and we will have no problems with that.”