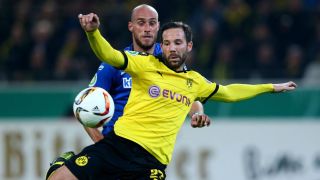 Borussia Dortmund came from behind to launch a demolition job as a 7-1 DFB-Pokal victory ended Stefan Effenberg's perfect start to life as Paderborn coach.

Effenberg masterminded consecutive wins in his opening two matches in charge of the Bundesliga 2 side and a dreadful error from Dortmund goalkeeper Roman Burki presented the prospect of an improbable cup upset.

Croatian striker Srdjan Lakic was the beneficiary midway through the first half but Dortmund's response was clinical in front of the Signal Iduna Park faithful.

Leading marksman Pierre-Emerick Aubameyang rested on the bench following his hat-trick in the 5-1 win over Augsburg and he looked on as Adrian Ramos, Gonzalo Castro and Shinji Kagawa all found a way through before half-time.

Ilkay Gundogan then converted a penalty to continue the rout and Castro scored a brilliant second.

There was worse to come for Effenberg – the Dortmund faithful predictably revelling in the former Bayern Munich hero's misery – as the excellent Henrikh Mkhitaryan teed up substitute Lukasz Piszczek before deservedly completing the scoring.

Before things unravelled completely, Dortmund were confronted with a well-drilled backline in the opening stages and Kagawa laboured too long before shooting at Lukas Kruse in the Paderborn goal.

Burki saved sharply at his near post to keep out a well-disguised Suleyman Koc strike but the Switzerland international was culpable when Dortmund went behind in shambolic circumstances after 21 minutes.

An ill-judged pass to Gundogan was sent back to the goalkeeper at pace and he dallied on the ball, gifting a simple finish to the on-rushing Lakic.

Unfortunately for Paderborn, their earlier discipline immediately deserted them and, after Kagawa clipped the top of the bar from Gundogan's throughball, Dortmund were back on terms four minutes later.

The roles were reversed when Castro stole in behind Daniel Bruckner to collect Ramos' flick forward and give Thomas Tuchel's team the lead.

Mkhitaryan twice came close to extending the advantage for a rampant Dortmund before Kagawa took the toughest of the opportunities to fall his way two minutes from the interval.

Castro was involved once more, finding his team-mate with a sumptuous first-time backheel, and the Japan star skipped past Dominik Wydra's challenge to lift a delicate finish into the net.

Matthias Ginter curled a shot over as Dortmund resumed on the front foot and the full-back drew a rash foul from Wydra to earn a 55th-minute penalty.

Gundogan stepped up and made no mistake, sending Kruse the wrong way and he was involved three minutes later in a brilliant fifth.

Mkhitaryan cut in from the left to feed Gundogan, who sashayed past a pair of challenges and played Castro through with the outside of his right foot to finish.

A beleaguered Paderborn were indebted to Kruse – a sharp reaction stop preventing Ramos from netting his second of the night and a double save from substitute Sven Bender capping a busy evening for the keeper – before their hosts brutally added insult to injury.

Piszczek tucked away Mkhitaryan's low cross from close range and turned provider for the Armenian to cap another irresistible attack.