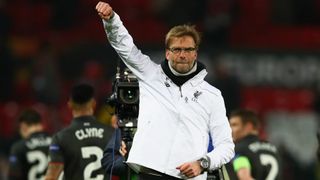 Liverpool have been drawn against Borussia Dortmund in the Europa League quarter-finals.

Jurgen Klopp will meet his old side in the last eight after the Anfield club overcame Manchester United in the last 16 with a 3-1 aggregate victory.

Dortmund, who will play the first leg at home, saw off Premier League title hopefuls Tottenham in the previous round with an emphatic 5-1 aggregate win.

Speaking prior to the draw in Nyon, Klopp said: "It's possible to go to the final - but you have to go a long way.

"We did really good, took all the games very seriously and did what we have to do.

"If you want to win this competition then you have to beat the best teams. It's not too important when!"

Holders Sevilla will face Liga rivals Athletic Bilbao, with the first leg to be played at San Mames, while Villarreal meet Sparta Prague, who shocked Lazio in the last 16.

Braga, who knocked out Fenerbahce, will meet Shakhtar Donetsk.