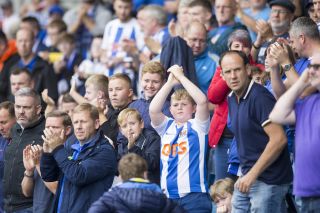 Kilmarnock manager Steve Clarke has urged fans to vindicate the club’s decision to cut Rangers’ ticket allocation and back their team to glory.

Almost 7,500 supporters turned out at Rugby Park on Saturday to see Killie return to third place in the Ladbrokes Premiership with a deserved 1-0 victory over Hibernian, courtesy of Eamonn Brophy’s first-half penalty.

Killie lead Aberdeen by six goals ahead of the final fixture of the Ladbrokes Premiership season and will secure a guaranteed Europa League place if they match the Dons’ result at Easter Road.

The Ayrshire club’s board recently announced that visiting Rangers and Celtic fans would only occupy one stand behind the goal instead of two next season, with the policy coming into effect next Sunday.

The move is designed to encourage more home supporters to turn up and there is plenty of incentive next Saturday with Killie looking to seal third spot and ensure there is no anxious wait to see if Celtic beat Hearts in the William Hill Scottish Cup final and ensure fourth spot carries a European berth.

Clarke said: “I just hope the Kilmarnock fans realise the big decisions that this club has made to close off one of those stands for next season, and hopefully they turn up in their numbers and prove Billy (Bowie), Phyllis (McLeish) and Cathy (Jamieson) correct.

“Everyone plays their part, and we’re hoping for a big crowd next week.

“It’s important that people come out and support that decision, and hopefully the team can give them something to shout about and end the season on a high.

“In my first home game, I think there was just over 3,000 people watching. We’ve come a long way in a short space of time.”

About 1,500 of the crowd on Saturday were supporting Hibernian and head coach Paul Heckingbottom was disappointed they had given the travelling fans little to cheer about.

Heckingbottom was involved in a verbal clash with his former Sheffield Wednesday team-mate, Alex Bruce, in the media room, accusing the Kilmarnock defender of diving to win the penalty following a tussle with David Gray.

But he admitted his side deserved nothing from the game.

Heckingbottom, whose team will finish fifth, said: “It’s the first time I’ve been disappointed. There would have been a lot of people expecting, not the performance, but the result because of the stage of the season. And I think that’s exactly what it was.

“We have had a week where we have had conversations with players and things like that, so there are reasons for it, but you still want to put in a performance that you enjoy watching and enjoy playing in it.

“The players are as disappointed as me.”