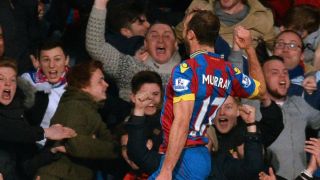 Murray was a constant nuisance to the City backline at Selhurst Park, scoring the opening goal in the 34th minute before winning the free-kick from which Jason Puncheon doubled Palace's advantage early in the second half.

It was Murray's fifth goal in as many appearances, and Pardew says it is the least the forward deserves after a serious knee injury ruled him out of the majority of last season.

"We said to Glenn you might need to buy us fouls, work hard, and I thought he gave an exceptional performance," Pardew told Sky Sports.

"Forget about his goal, it was a real lesson in how to play the number nine role.

"He had a terrible time with injuries, he should have been a Premier League player years ago, so I'm pleased for him that he's getting the reward for the quality that he has."

Murray himself said he is thrilled to be playing a starring role in Palace's resurgence under Pardew.

"It took a lot of time to get over my knee, I've worked hard to get back into this position and I'm enjoying it now," he stated.

Pardew went on to pay tribute to the battling qualities displayed by Palace, as they were forced to hold off a City side who enjoyed the majority of possession.

"We had to lean on our character tonight, we've got some good professionals in this group and that showed," the former Newcastle United boss added.

"Today was about the resilience, the character, and it was a shame we didn't have enough offensive moments tonight but it's a great result for the club, our fans were terrific.

"We've got three games [Sunderland, West Brom and Hull City] now, a good little run for us, then we come in against the big boys.

"We'll just keep creeping up the league if we can and keep setting our goals that little bit further."