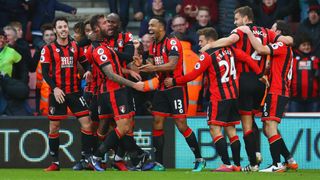 Liverpool's title challenge suffered a stunning late blow as Bournemouth came from two goals down to beat Jurgen Klopp's men 4-3 in a thrilling clash at the Vitality Stadium on Sunday.

Ryan Fraser and Steve Cook struck in the latter stages of the second half before Nathan Ake hit an injury-time winner for the home side, who had trailed 2-0 at half-time and 3-1 with 25 minutes to play.

Sadio Mane and Divock Origi had put Liverpool in charge at the break after they capitalised on two errors in two minutes from goalkeeper Artur Boruc, and although Callum Wilson halved the deficit from the penalty spot, Emre Can's superb strike looked set to hand the visitors a fifth win in six league games.

But Bournemouth, who had lost seven of their previous nine meetings with Liverpool in all competitions, sprung an unlikely comeback and snatched a winner in the 93rd minute after Loris Karius spilled the ball into Ake's path.

The result means Liverpool remain four points off leaders Chelsea, while Bournemouth climb into the top 10.

Liverpool should have taken the lead after only 10 minutes but Origi somehow failed to connect properly with Nathaniel Clyne's low cross from the right when he was unmarked at the far post.

The visitors kept up their early pressure as Bournemouth struggled to get the ball beyond the halfway line, and they capitalised on their dominance with 20 minutes played.

Can lofted a simple pass over the defence and into the path of Mane, and as Boruc hesitated while advancing off his line, the Senegal forward poked the ball past him and into the far corner.

Two minutes later, a second Boruc blunder allowed Liverpool to double their lead. The 36-year-old raced from his penalty area to try to intercept Jordan Henderson's pass to Origi but got nowhere near the ball, allowing the Belgian to move round him into space before curling a brilliant finish into the unguarded net from a tight angle.

Karius had been a spectator for much of the half, but he endured a nervy moment when he parried Josh King's low cross behind at the near post, and Bournemouth were furious not to win a penalty from the resulting corner when Ake went to ground after being caught by Roberto Firmino.

Eddie Howe introduced £15million former Liverpool man Jordon Ibe at half-time, but it was fellow substitute Fraser - on for Junior Stanislas after Henderson's challenge injured his ankle - who handed Bournemouth a lifeline just moments after his introduction.

Fraser was bundled over by Milner as he drove into the penalty area, allowing Wilson to sweep the ball low into the net from the spot, with Karius diving the wrong way.

But just as the home fans raised the noise levels, Liverpool struck again. Mane worked some space down the right before prodding the ball to Can, who rifled a fine curling shot past Boruc and into the net from the edge of the area.

Liverpool - who took off Mane after he appeared to sustain an injury - were centimetres from a fourth after Boruc almost carried the ball across his own line, but the home side then enjoyed a blistering two-minute spell of their own to level the scores.

First, Fraser halved the deficit after he collected Benik Afobe's pass before drilling a low shot beyond Karius, who got hands to the ball but could not keep it out of the bottom corner.

And with 12 minutes to play, the former Scotland youth international turned provider for Cook, who controlled his cross superbly before arrowing a strike on the turn into the net beyond the static Karius from inside the area.

Afobe was denied a late winner by a fine save from Karius, before Origi fired narrowly over the bar from a corner, but Ake proved the hero for the home side in the 93rd minute, bundling the ball into the net after Karius had spilled Cook's shot.