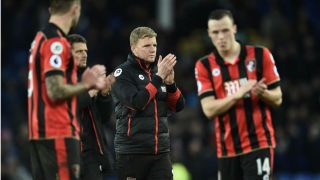 Eddie Howe has acknowledged that Bournemouth are in danger of being dragged into a scrap for Premier League survival, after their 6-3 defeat to the Romelu Lukaku-inspired Everton.

Bournemouth are now without a win in their last five league fixtures, having conceded 16 goals during that run, and find themselves just six points clear of the relegation zone.

And Howe, who switched to a back three for Saturday's encounter at Goodison Park, knows his side must find a response if they are to avoid getting dragged further into trouble.

"I wouldn't be doing my job if I wasn't concerned. There's a fine line between success and failure and we're on the wrong end of that at the moment," Howe said.

"It's a tough one for us to take. We will bounce back, I have no doubt over my team’s ability to get out of this difficult period.

"We showed a real effort and determination to try and get back into the game, but there are a lot of things to learn.

"We didn't handle the goals very well at all and Everton made us pay with their clinical nature in front of goal.

"We have been looking over our shoulder all season. We want to get to 40 points as quickly as possible."

Bournemouth's first chance to respond to Saturday's defeat is a home clash against Manchester City on February 13.