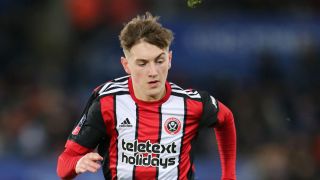 The 20-year-old midfielder, who represented England at under-20 level, put pen to paper on a four-year contract at the Vitality Stadium.

Brooks made 33 appearances in all competitions in 2017-18 as the Blades finished 10th in the Championship and is keen to step up a division.

"The chance to come and play for a club in the Premier League is a great opportunity for myself. I'm delighted to be on board," said Brooks in a statement.

"When you look at Eddie Howe as a manager you want to be involved in something like that. He's got big ambitions and with younger players he develops them well and he gives them a chance.

"That's something I'm looking for and he was one of the main attractions for me to come to Bournemouth."

Howe said: "We've seen enough to suggest he is a player who could be outstanding at this level in the future if he develops in the right way and is willing to learn and improve.

"I believe he has a very exciting future and I'm delighted that future will be here at Bournemouth."