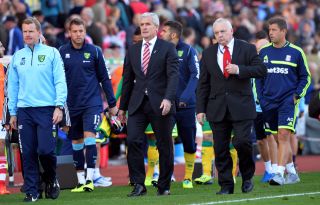 The Premier League side sit 16th after seven games, with losses in their last three matches halting their progress early on in the campaign.

Bowen acknowledged that it will take time to click under new boss Mark Hughes and hopes that the fans will be patient as they continue to try to improve the team.

"We believe this is the right way to play football," he told The Sentinel. "And I don't think our fans would appreciate us changing now.

"Just because the league table doesn't make fantastic reading at the moment, we are not going to change anything.

"We know there will be some wanting us to get up and at 'em and into the box, but week in, week out I think we are probably creating more chances than last year and are more pleasing on the eye.

"We believe in what we are doing and I believe the players do as well.

"Everybody realises when we came and were trying to change the style of play that there would be ups and downs, but the only downside in nine games so far has been the Norwich game and the first half against Crystal Palace.

"We are probably three points off where we want to be. Goalscoring is still a problem, but we are creating chances."

Stoke have netted just four times in their opening seven league clashes, but will hope to turn things around when they face West Brom on October 19.