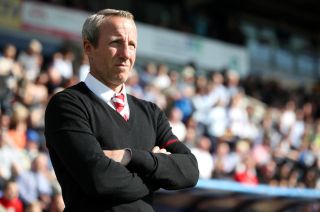 Lee Bowyer has warned Charlton they cannot afford to take their foot off the pedal if they are to keep their dream of playing Sky Bet Championship football next season alive.

The Addicks head into Friday evening’s League One play-off semi-final, second leg clash with Doncaster having already been served with warning that the job is far from done despite their first leg victory at the Keepmoat Stadium on Sunday.

First-half goals from Lyle Taylor and Joe Aribo looked to have put Bowyer’s men firmly in the driving seat for a trip to Wembley, but Matty Blair’s late strike kept Rovers in it.

Bowyer told the club’s official website: “We’ve got a one-goal lead going into the home leg, so we’re in a good position, especially with our home record this season.

“But we have to respect Doncaster, they’re a good side. They’ve got players that can hurt you and they’re good from set-pieces.

“We just have to be professional and have the right attitude and not take our foot off the pedal, which I doubt will happen anyway because the group that we have has been exceptional all season.”

Bowyer has no fresh injury concerns with striker Josh Parker fit after limping off at the Keepmoat with cramp, and opposite number Grant McCann will be similarly untroubled when he comes to select his team.

McCann is acutely aware of the Addicks’ home record – they have not lost in the league at the Valley since October – but he did guide his team to a 2-0 FA Cup second round victory there in December, albeit against a much-changed side.

Now he is urging his players not to pass up an opportunity to change their lives.

He told the club’s official website: “We’ve got to this stage and we’re here because we deserve to be here, make no mistake about that.

“We’ve proven over 46, 47 games that we’re a good team, so let’s not settle for second best, let’s make sure we give everything and if we come unstuck and things don’t go our way, then at least we can hold our hands up and say we gave it everything we have.

“We’re two wins away from playing in the Championship and when you say it like that, it does make you think. Something like that can change the lives and careers of everyone in that changing room.”