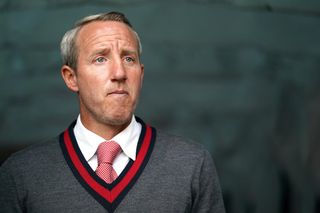 Lee Bowyer admitted he was puzzled why he was sent off as Charlton were beaten 1-0 by Birmingham.

The south London side missed the chance to go top of the Sky Bet Championship after 16-year-old full debutant Jude Bellingham netted.

Referee Matthew Donohue dismissed Bowyer in second-half injury time as he threw a loose ball in the direction of the Birmingham technical area, leaving the Charlton manager perplexed.

He said “Someone from their staff threw a ball onto the pitch to try and waste time, which I’ve never seen before.

“The ball then ended up next to me. I don’t know how, so I pick it up and start walking towards their bench shouting if it was their ball.

“I threw it back, and because the referee said I left my technical area and throwing the ball that was a red card.

“I’ve never heard of that rule in my life. I think it’s disappointing because me and the players don’t like losing games, especially ones where I don’t think we deserved to lose.”

The incident overshadowed a win for Birmingham that gave Charlton their first defeat this season.

A diving header on the half-hour mark by Tomer Hemed went wide of the post, while Jonathan Leko found space after 34 minutes but fired his effort off target.

Birmingham started to press, and after 39 minutes Lukas Jutkiewicz forced goalkeeper Dillon Phillips to tip over the crossbar.

The visitors took the lead seven minutes after the restart when Maxime Colin squared to Kerim Mrabti, who slid the ball into the centre of the area for Bellingham to score.

The hosts started to press, but Birmingham still looked dangerous on the break. Colin engineered a solo run after 65 minutes and found Jutkiewicz, who once again forced Phillips to nudge his shot over the woodwork.

Lee Camp made his first real save after 72 minutes when he did well to block a fierce drive by Chris Solly.

A minute later, the Birmingham keeper was again called into action when he turned away a low drive by Conor Gallagher.

With Bowyer dismissed in injury time, Birmingham manager Pep Clotet apologised to the Charlton manager but was pleased with his team.

He said “It was just something that was a coincidence. If Mr Bowyer took it in the wrong way then I’m sorry.

“I have a lot of respect for him, firstly what he means for Birmingham and secondly what he’s doing with the team this season.

“It’s a massive step forward for us, because for the result and a second away win against an in-form side it makes it more special.

“We knew we would have to do everything right, all the attitude from my players had to be right.

“We managed to be very strong defensively, we were able to stamp our football on the pitch.

“Jude is proof that we trust what we do with the academy, in that you cannot buy in football the feeling our fans have.

“The feeling we have for Jude to come in now, that’s something we’re very proud of.

“I want to remind him of the importance of this chance. It’s not only me giving the chance but the team.”