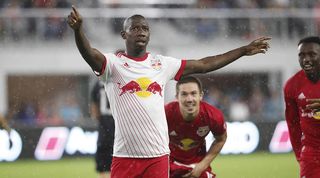 Bradley Wright-Phillips has told FourFourTwo that Thierry Henry warned him that MLS is harder than it looks after he joined New York Red Bulls in 2013.

Having previously spent the majority of his career in the Championship and League One, Wright-Phillips moved to the United States at the age of 28.

Wright-Phillips has also had the opportunity to play alongside some big names during his spell in New York, including Tim Cahill, Juninho Pernambucano and Henry.

Speaking in the new issue of FourFourTwo magazine, the 34-year-old has exclusively revealed the advice the Arsenal legend gave him upon his arrival.

“Obviously Thierry was a massive influence on me,” he said. “He let me know early on that the league isn’t so easy.

“When I’d only just arrived and wasn’t ready to play, I asked Thierry, ‘We’ve got you, Tim Cahill and others – why aren’t we winning this game easily?’

“He told me, ‘You’ll see. It’s not easy as you think.’ I outscored him, which people always mention, but that wasn’t his role in the team.

“He said to me, ‘Make a run and I’ll pick you out.’ People remember him from his Arsenal days just scoring goals, and think that’s all there is to him, but he’s an amazing No.10 – ridiculous. He wasn’t only about scoring goals; he was doing it for the team.”

Wright-Phillips also revealed the story behind his brother Shaun joining him at Red Bulls in 2015.

“Shaun was getting older then, and we had a young philosophy at the club,” he added.

“He actually came to the US for a wedding and just said to me that he wouldn’t mind playing for Red Bulls, so I asked the coach if he could come and train. I knew that once they saw him train, they’d think, ‘We could use him, even if he doesn’t play every week’.

“He still had the touch and experience to pass on. It was fun to play with him again – it’s a shame things didn’t last longer.”

Read the full interview with Bradley Wright-Phillips in the Autumn 2019 issue of FourFourTwo magazine, out in shops and available digitally now. We also chat to Raheem Sterling, meet Lazio’s ultras, discover how to make Real Madrid and Barcelona great again, catch up with John Barnes and much, much more. You don’t want to miss it.