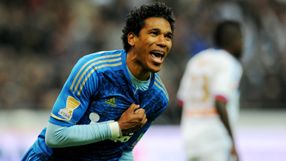 Brandao, who came on as a late substitute in a drab final at the Stade de France, scored in the 105th minute with an angled shot from a cross by Benoit Cheyrou to secure his team a berth in next season's Europa League playoffs.

The result ended Marseille's dreadful sequence of 12 matches in all competitions without a win, 11 of them defeats.

Lyon will have another chance to lift some silverware when they meet third division Quevilly in the French Cup final later this month.

"It does not change the fact we're having a bad season but it's a trophy and nobody can take that away from me, not even my worst enemies," Marseille coach Didier Deschamps told a news conference.

As a player and a coach, former France midfielder Deschamps has lost only one game at the Paris venue, a 3-2 defeat against Russia in 1999.

"I told the players to be positive. They did what they had to do and they deserve this trophy," he added.

A packed crowd had to wait until the 39th minute for the first goal attempt of the game, a weak effort from Marseille striker Loic Remy.

Mathieu Valbuena's curling shot from the edge of the box on 62 minutes then went wide as Marseille looked to take control of a game littered with fouls.

They also went close in the 65th minute when Morgan Amalfitano's header from a Valbuena cross was deflected on to his right post by keeper Hugo Lloris.

It came as little surprise, however, when the match went into extra-time.

Brandao replaced Remy in the 97th minute as Deschamps looked to freshen up his attack and the move paid off.

The Brazilian, who went back to Marseille in January after loan spells in his native country, was on the receiving end of Cheyrou's centre from the left and coolly slotted the ball home.

Lyon pushed hard in the closing stages but the Marseille defence, well-marshalled by Nicolas Nkoulou, held on.

The beaten finalists, who did not have a shot on target throughout the 120 minutes, finished the game with 10 men after defender Dejan Lovren picked up a second yellow card in the last minute.

"We were timid, we made a lot of mistakes but Marseille also did not let us play our game," said Lyon coach Remi Garde. "We were not efficient enough and some of my players were not fresh enough.

"We still have two objectives," he said, referring to the French Cup final and fourth-placed Lyon's bid to clinch third position in Ligue 1 - a finish that would give them a Champions League play-off spot next season.