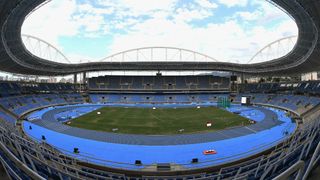 The proposed friendly between Brazil and Colombia in order to raise money for Chapecoense will take place in Rio de Janeiro on January 25, the Brazilian Football Confederation (CBF) has confirmed.

Chapecoense players, backroom staff and directors were among the 71 people who lost their lives when a flight carrying them to Colombia for the Copa Sudamericana final against Atletico Nacional crashed last month.

Offers of support flooded in from across the globe, with teams in Europe and elsewhere in South America offering to loan the Brazilian side players for free.

Chapecoense will take on Barcelona after being invited to participate in next year's Joan Gamper Trophy, while a match between Brazil and Colombia will also be played for the benefit of the club and the families of those who died.

The two nations will meet at the Estadio Nilton Santos – the stadium which played host to the Olympic Games earlier this year – next month, with Tite in charge of a Brazil squad formed only of domestic-based players.

"Because it is not a date for FIFA internationals, we will work with the players of Brazilian teams so as not to embarrass a club or player that has to deny the call because of a championship being in progress," said Brazilian national team co-ordinator Edu Gaspar.

Tite added: "It will be a special match, but we will use it to take a closer look at some player who have not had the opportunity in other team selections."

The iconic Maracana was touted as a potential venue for the match but the Estadio Nilton Santos was preferred due to the "smaller and more efficient operating structure", according to director of CBF competitions Manoel Flores.