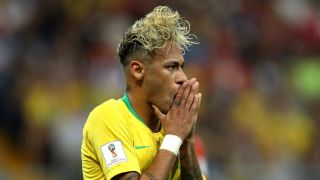 In South Africa in 2010, the Swiss stunned heavy favourites Spain 1-0 in their opening group game, as Vicente Del Bosque's side got off to a false start.

It didn't prevent them from lifting the trophy a little under four weeks later and a frustrating 1-1 draw in Rostov-on-Don on Sunday should not diminish Brazil's status as one of the frontrunners for the big prize on offer in Russia.

Perhaps Tite's team did not want to feel left out, after watching fellow heavyweights Spain and Argentina drop points against Portugal and Iceland respectively, France labour to an unconvincing win over Australia and holders Germany suffer a shock loss to Mexico.

They started brightly enough, as Gabriel Jesus and Philippe Coutinho, the scorer of a stunning opening goal in the 20th minute, sparkled brightly next to the mighty Don River.

Neymar less so - the Paris Saint-Germain forward found himself a peripheral figure throughout much of the contest, but Brazil fans needn't panic, about the team or their star man, despite Steven Zuber's unscripted intervention.

Unlike on home soil in 2014, the fortunes of this Selecao side do not appear dependent on the former Santos and Barcelona attacker's contribution.

Certainly, it would be better to have Neymar fit and firing throughout to lead their would-be charge to the decider in Moscow next month, and there remains plenty of time for the world's most expensive player to get up to speed.

But with Willian, Gabriel Jesus, Coutinho, Douglas Costa and Roberto Firmino also among Tite's attacking options, playing ahead of a balanced midfield comprising Paulinho, and one of Casemiro or Fernandinho, and ably supported by Marcelo and Danilo on the flanks, Brazil can justifiably still hope to win this World Cup, with or without Neymar. And with or without an opening victory over Switzerland.

This group of players is reminiscent of the 2002 vintage, in terms of balance and structure, if not personnel. Ronaldinho, Rivaldo and Ronaldo were the exceptional frontline, and Tite's equivalent cannot yet claim to be worthy of inheriting their mantle, despite their promise. Such accolades may well depend on their fortunes here.

But behind the creators and finishers, the unspectacular workers would recognise something of themselves in one another - Gilberto Silva and Kleberson, fated to different Premier League fortunes, laid the foundations and supplied the building blocks for those triumphant weeks in Japan and Korea. Lucio, Edmilson and Roque Junior were solid enough at the back. Their humble successors can do the same 16 years on.

Luiz Felipe Scolari knew exactly what was required from each department of his side to get the job done and Tite appears to share that clarity and simplicity of purpose, a characteristic lacked by many of the men to separate their respective tenures, including 'Felipao' in his ultimately traumatic second bite at the cherry.

It's worth remembering that it took an 87th-minute penalty from Rivaldo to get Brazil up and running in their opener against Turkey in 2002.

No such last-minute reprieve was forthcoming in Rostov, despite their best efforts in the final moments, and the merciless quills of the Brazilian and global media may well be sharpened ahead of next Friday's meeting with Costa Rica in St. Petersburg.

But don't write Brazil off just yet, far from it. We've only turned the first page in the Selecao's latest World Cup chapter.