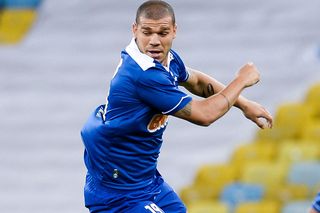 Botafogo's Elias struck a brace in their 2-1 win on the road at Santos, who had Cicero pull a goal back in the 67th minute.

There are five points between second-placed Botafogo and third-placed Gremio after the latter slumped to a 1-0 home loss to Atletico Mineiro.

Fernandinho scored the game's only goal as Mineiro extended their unbeaten run to seven matches in all competitions.

Fifth-placed Internacional have made a habit of being hard to beat this season, and that form continued with a 1-0 win at Criciuma.

Otavinho hit the winner on 51 minutes, as Internacional joined the top two with the fewest losses (three) this season.

Vitoria had their first win in a month, coming from behind to beat Nautico 2-1 courtesy of a Dinei brace.

Coritiba fought valiantly to a 2-2 home draw with Bahia, as Alex's 90th-minute goal earned the hosts a point.

Ponte Preta and Flamengo both finished with 10 men, and a point, after their 1-1 draw.

Goias struck late to salvage a 2-1 victory on the road at Corinthians, with Amaral's 85th-minute goal the difference.

Sao Paulo climbed out of the relegation zone, with a 2-0 win away at Vasco da Gama - the team that replaced them in the bottom four.

Fluminense came from 1-0 down to post a 2-1 home triumph over Portuguesa.