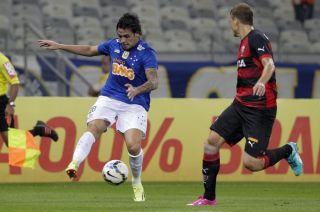 Brazil's top flight had been on hiatus since June 4 due to the World Cup but after more than a month, competition resumed with defending champions Cruzeiro continuing where they left off.

Second-half goals from Alemao (own goal), Ricardo Goulart and Everton Ribeiro inspired Cruzeiro to victory over second-bottom Vitoria at the Estadio Governador Magalhaes Pinto in Belo Horizonte on Thursday.

Ayrton pulled a goal back in the 92nd minute but it was a mere consolidation for visiting Vitoria.

The win - Cruzeiro's third in succession - helped the club to 22 points and preserved their three-point advantage after 10 rounds.

Corinthians and Sao Paulo are Cruzeiro's nearest rivals, after both were winners midweek.

Two goals inside the opening 10 minutes from Paolo Guerrero and Fagner saw Corinthians extend their unbeaten streak on home soil to four games.

Meanwhile on Wednesday, goalkeeper Rogerio Ceni and Alan Kardec were on the scoresheet in the first half as Sao Paulo beat lowly Bahia 2-0.

Prized recruit Kaka - on loan from incoming MLS franchise Orlando City until December - did not play.

In other results, Santos rose to fifth in the standings following their impressive 2-0 win at home to Palmeiras on Thursday.

Bruno Uvini opened the scoring in the 24th minute before Alison secured the win 20 minutes from time.

Santos are level on 17 points with Sport Recife, who edged Botafogo 1-0 on Wednesday.

Fluminense missed the chance to consolidate third position after they were stunned 3-2 by Criciuma on Wednesday.

Criciuma raced out to a three-goal lead courtesy of a brace from Paulo Baier and Serginho's 67th-minute goal before Fluminense ensured a tense finale with two of their own inside the final six minutes.

However, Fluminense were unable to add to the two goals in a minute from Dario Conca and Matheus Carvalho as they slumped to their second loss in three games.

Elsewhere, Flamengo remain bottom of the table after they lost 2-1 at home to seventh-placed Atletico PR on Wednesday.

Figueirense - fourth from bottom - moved to within a point of safety thanks to a hard-fought 2-0 win over fellow strugglers Coritiba.

Meanwhile, Gremio and Goias played out a scoreless draw in their midtable clash.