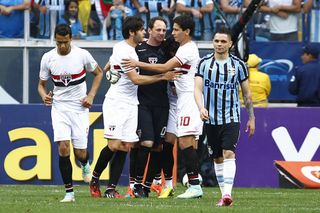 Iconic veteran goalkeeper Rogerio Ceni was at it again, scoring from the penalty spot in the second half to help Sao Paulo to a 1-0 win at Gremio on Saturday.

Sao Paulo had gone four league matches without a win - losing three - prior to their trip to the Arena do Gremio.

Luiz Felipe Scolari's men on the other hand - fifth in the table and level on points with Sao Paulo before kick-off - were in the midst of a nine-game unbeaten streak.

Both teams had opportunities to win the match but it was the out-of-form Sao Paulo, who emerged triumphant after Ceni scored his 122nd career goal.

Referee Felipe Gomes da Silva awarded a penalty after Sao Paulo striker Alan Kardec was fouled inside the area and Ceni made no mistake from the spot - netting his seventh goal of the season.

Sao Paulo improved to 46 points from 26 matches, just one behind second-placed Internacional, who lost 2-1 at league-leading Cruzeiro.

Marcelo Moreno and Marquinhos were on target in the second half as Cruzeiro extended their lead at the summit to nine points.

Unbeaten in five league matches, International were full of confidence heading into their clash with the defending champions.

But Cruzeiro were simply too good, storming out of the blocks and opening the scoring in the 20th minute through Bolivian star and top goalscorer Moreno.

Internacional failed to clear their lines and Moreno pounced, firing a ferocious shot past former Milan goalkeeper Dida from outside the box for his 13th goal of the campaign.

After Cruzeiro's Willian skied a penalty over the bar, Alex came off the bench and pulled a goal back for Internacional with a free-kick four minutes shy of the hour-mark.

Henrique bagged a hat-trick in 12 minutes as Palmeiras climbed out of the relegation zone courtesy of a 4-2 victory at home to Chapecoense.

Corinthians' run of consecutive defeats ended after they accounted for Sport Recife 3-0.

Rock-bottom Coritiba prevailed 1-0 against Atletico PR and Marcinho's brace inspired Vitoria to a 2-1 win over Botafogo.

Fluminense played out a 1-1 draw with Bahia, while Goias defeated Figueirense 1-0.