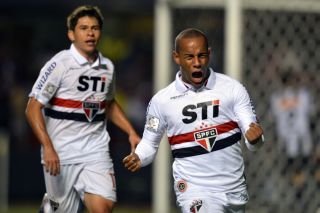 Ademilson inspired Sao Paulo's victory at Cruzeiro's Estadio Governador Magalhaes Pinto, providing the final pass for both Douglas and Reinaldo's goals as the visitors snatched the three points away to the league leaders.

Cruzeiro had not lost in Brazil's top tier of football since August 14 but their 12-game unbeaten streak came to an end on Wednesday, as Sao Paulo notched consecutive wins to move out of the relegation zone.

Sao Paulo moved up to 16th with 33 points, one ahead of Vasco da Gama, who dropped into 17th, the highest position in Serie A's relegation zone, while Cruzeiro's gap at the top of the table remains 11 points after second-placed Gremio also lost.

In Belo Horizonte, Sao Paulo, who had overcome Vitoria 3-2 in the previous round, started strongly, testing Cruzeiro's goalkeeper Fabio from long range on a couple of occasions.

A sharp header from Cruzeiro midfielder Ricardo Goulart forced visiting goalkeeper Denis into a fine save soon after, while Willian wasted a huge opportunity for the hosts when he knocked a rebound into the post with an empty net beckoning.

Cruzeiro were denied a penalty early in the second half when Goulart appeared to be brought down by Rodrigo Caio before Paulo Ganso curled a free-kick just over the bar for Sao Paulo.

After plenty of end-to-end football, Sao Paulo finally broke the deadlock in the 77th minute when Ademilson turned sharply in the box to tee up the onrushing Douglas, who blasted the ball home.

Just three minutes later and it was 2-0 as Ademilson collected Ganso's deflected free-kick and cut the ball back for Reinaldo to head home from less than a metre.

Gremio missed the opportunity to take advantage of Cruzeiro's slip-up as they conceded an 89th-minute goal to lose 2-1 at home to Criciuma.

The visiting Criciuma side led at half-time through Wellington Paulista but Gremio looked to have salvaged a point after Maximiliano Rodriguez's 57th-minute equaliser, until Serginho scored with a minute left for the away team.

Botafogo took advantage of Gremio's loss and Atletico Paranaense's scoreless draw away to Corinthians by thumping Nautico 3-1 to move into third position.

Rafael Marques, Clarence Seedorf and Gege scored for Botafogo, who had to come from behind after Maikon Leite had given Nautico the home side the lead in the ninth minute.

In a poor round for the leading teams, fifth-placed Atletico Mineiro were stunned 2-0 by Ponte Preta and Bahia overcame sixth-placed Vitoria by the same margin.

In other results, Coritiba defeated Santos 1-0, Flamengo won 2-1 over Internacional, Vasco da Gama triumphed 1-0 against Fluminense and Goias held on for a 2-1 win against Portuguesa.