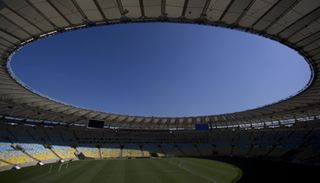 The Rio de Janeiro state government said on Thursday night that the judge lifted the suspension order she had signed earlier in the day after missing paperwork was provided and the game will go ahead as planned.

"The game between Brazil and England is confirmed for June 2 with all safety requirements tested," it said in a statement that blamed a "bureaucratic lapse" for the confusion.

With the England team already in Rio de Janeiro, the injunction came as a shock and threatened to scuttle the first game between England and Brazil in three decades at the stadium that is regarded as the spiritual home of Brazilian football. England won only one of five encounters there.

Maracana was built for the 1950 World Cup and was supposed to be ready for its re-inauguration in December, six months ahead of the Confederations Cup in June.

It did not, however, re-open until April 27.

Maracana's $500-million overhaul program was plagued by delays and burgeoning costs and will only manage to hold one professional test match before the June 15-30 Confederations Cup.

The stadium is due to host seven matches during the 2014 World Cup, including the final.