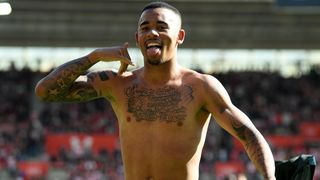 Brazil's magnificent resurgence under Tite is beyond doubt but there remains a sense that the rehabilitation will only truly start with victory over Switzerland in their opening World Cup Group E match.

Sunday's game in Rostov marks the Selecao's first game in the competition since their humiliating 7-1 semi-final defeat to Germany on home soil four years ago – an ordeal that rocked a football-mad nation to its core.

Dunga came in for the humiliated Luiz Felipe Scolari, at which point stagnation truly set in. A pair of failed Copa America campaigns later and Tite got the call.

The decorated former Corinthians boss has only suffered defeat once in 21 games at the helm and Brazil swaggered into the tournament with a 3-0 victory in Austria that flattered their hosts.

Only four survivors – Marcelo, Paulinho, Fernandinho and Willian – remain from the side routed by Germany, a game that Neymar missed through injury.

That, of course, has been a theme recently revisited but the world's most expensive player is set to be joined by Philippe Coutinho, Willian and Gabriel Jesus in a mouth-watering attacking line-up.

"We should be a cohesive team, like a family," said Manchester City striker Jesus, who is set to get the nod ahead of Liverpool's Roberto Firmino as starting number nine.

"Everyone keeps talking about our attack, but players who tackle opponents should not be forgotten. We have a perfect defence, which makes our team balanced."

Switzerland head into the match with a lofty FIFA ranking of sixth in the world – a standing bolstered by some judicious selection of friendly opponents.

"I think that the first game always will set the tone and we play against Brazil, against a great team with great individuals like Neymar, Coutinho and Thiago Silva," he told Omnisport.

"It's down to us. Switzerland have progressed a lot. But we know that we play against one the best teams in the world, but in football anything is possible."

All eyes will be on Brazil's talisman to see how full his recovery from that broken foot is – the evidence provided by his magnificent goals in friendly wins over Croatia and Austria suggest the rehabilitation has been pretty thorough. Tite has a talent-stacked squad but Neymar remains their likely key to an unprecedented sixth world title.

The former Bayern Munich youngster has long been his nation's major creative force, adept playing on either flank or behind the striker and with a vicious left boot. However, it remains to be seen how much a sapping relegation with Stoke City in the Premier League has taken out of the 26-year-old.

- Brazil have won 16 of their last 18 opening games at the World Cup (D2). The last time they lost their first game in the tournament was in 1934 against Spain (1-3).
- Switzerland won all bar one of their games in the regular qualifying phase for Russia 2018 (W9 L1), the only exception coming against European champions Portugal away.
- Xherdan Shaqiri has been directly involved in five of Switzerland's last six goals at major tournaments (four goals, one assist). He is also the last player to score a hat-trick at the World Cup, against Honduras on June 25, 2014).
- Neymar was involved in five of Brazil's 11 goals at the last World Cup (four goals, one assist). He also played a part in more goals than any other player in the CONMEBOL qualifiers for the 2018 World Cup, with six goals and eight assists.