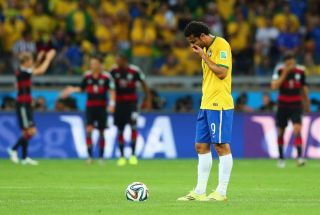 Substitute Andre Schurrle came off the bench in the second half to bag a brace, while Oscar scored a consolation goal in the closing stages.

Speaking to SporTV post-game, Fred could not hide his disappointment as Brazil were left to pick up the pieces on the back of the team's first defeat on home soil since 1975.

"It's certainly the worst defeat of (my) career, all players who experienced this time of sadness," said Fred, who was one of Brazil's underperformers after scoring once and managing just eight shots throughout the tournament.

"We made the worst game of our lives and Germany made the best of their lives.

"It is a moment of great sadness and disappointment, but we'll have to hold on to people who will help us in these difficult times we are going through now.

"It is a scar that will forever live in all of our lives, but we will have to seek a higher power to pass such adversity."

Meanwhile, Dani Alves - an unused substitute in Brazil's past two fixtures having played the entire match against Chile in the round of 16 - said the team were at a loss to explain the first-half performance at the Estadio Gobernador Magalhaes Pinto.

"We're trying to understand what happened," he said. "Those six minutes of imbalance were crucial."

"It was a first half to forget. We didn't compete. Germany deserve credit; they taught us a lesson.

"We're sorry to all the fans... but the pain is bigger for us than it is for everyone else."