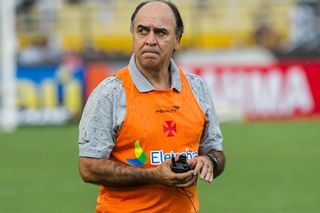 Cruzeiro maintained their four-point lead at the top of the Serie A after Willian struck in either half to secure victory at the Estadio do Governo do Estado de Goias, keeping the Belo Horizonte club clear of Botafogo and Gremio.

In Goias, the home side took the lead in the 27th minute when Ramon burst onto a ball over the top of Cruzeiro's defence and dinked a cross to the back post where Renan Oliveira headed home.

The league-leading visitors equalised 11 minutes later when Willian was released by Alisson and toe-poked a shot past Goias' goalkeeper.

Willian scored the winning goal in the 72nd minute when a move down the right-hand side saw Mayke cut the ball back to the 27-year-old forward for another cool finish.

The win took Marcelo Oliveira's Cruzeiro to 43 points, while Botafogo moved up to 39 and Gremio sit third on 37.

Flamengo continued their rise up the table with a 2-1 triumph over Santos on Thursday.

Mano Menezes' team had lost three of their past four games heading into their home fixture versus Santos but goals to captain Leo Moura and Hernane ensured their second win in three matches.

The win took Flamengo to 11th on 25 points, just behind 10th-placed Atletico Mineiro on goal difference.

Both of Flamengo's goals came from pressurising Santos' defenders with Moura opening the scoring after 18 minutes when he intercepted a pass out of the visiting back four, fed the ball to Hernane and burst forward.

As Hernane took a touch around Santos goalkeeper Aranha, Flamengo's captain was there to score.

In the 55th minute, Flamengo defender Samir intercepted another pass in Santos' forward half and then released Carlos Eduardo down the right channel, who squared the ball for Hernane to finish.

Samir conceded a penalty just a minute later, which Cicero converted for Santos but the hosts held on for victory.

Struggling Sao Paulo clinched an important win with a 1-0 triumph over Ponte Preta, while Mineiro beat Coritiba 3-0 and Internacional drew 2-2 with Vitoria.

In other Serie A results, Atletico PR drew 1-1 with Fluminense, Portuguesa defeated Vasco da Gama 2-0 and Bahia drew 2-2 with Criciuma.