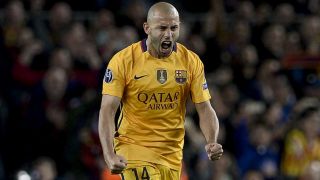 Barcelona have announced they have reached an agreement with Javier Mascherano over a new and improved three-year deal.

The Argentina international had been linked with a switch to Juventus, who have already signed full-back Dani Alves from Barca in the close season.

However, director of institutional relations Albert Soler has confirmed that Mascherano has pledged his future to the club he joined from Liverpool in 2010.

"We don't have to talk about him," he said. "The club announces that we have reached an agreement to improve his contract in the next three seasons with a better one.

"It was one of the issues that we had left."

The announcement was made as Barca presented midfielder Andre Gomes, who has joined from Valencia on a five-year deal for a fee that could rise to as high as €70million, depending on bonuses.

Mascherano made 51 appearances for Luis Enrique's side last season as they defended their domestic double.

Albert Soler: "An agreement has been reached and will continue for the next three years" July 27, 2016