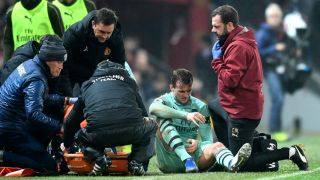 Arsenal could be without Rob Holding for up to nine months after scans confirmed the central defender ruptured the anterior cruciate ligament in his left knee against Manchester United.

Holding was forced off after 36 minutes of the 2-2 draw at Old Trafford on Wednesday, with Unai Emery admitting "the first news is not good" 24 hours later.

Emery suggested Holding could miss a significant period of time, and Arsenal's medical update on Friday confirmed he will not feature again this season.

A statement read: "Further to the injury sustained during our match at Manchester United on Wednesday night, we can confirm that Rob Holding has ruptured the anterior cruciate ligament of his left knee.

"Rob will undergo surgery to repair this in the coming days. The rehabilitation process is expected to take between six to nine months.

"Everyone at the club will now be working as hard as we can to ensure Rob is back on the pitch as soon as possible."