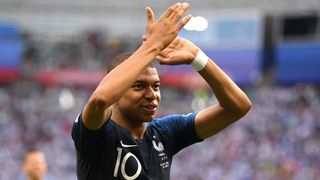 Real Madrid denied reports they have reached an agreement with Paris Saint-Germain for Kylian Mbappe, describing the claims as "completely false".

French journalist Baptiste Ripart posted on Twitter on Tuesday that Madrid had agreed deal worth €272million, spread over four payments, to take Mbappe to Madrid.

That report came just a day after Madrid had rejected talk in Spain of a world-record €310million bid for Mbappe's PSG team-mate Neymar, who became the world's most expensive player when he left Barcelona for Paris last year.

And Madrid have moved to issue a similar denial relating to the France international. A club statement read: "Given the information published in the last few hours regarding an alleged agreement between Real Madrid C.F. and PSG for the player Kylian Mbappe, Real Madrid would like to state that it is completely false.

"Real Madrid has not made any offer to PSG or the player and condemns the spreading of this type of information that has not been proven by the parties concerned."