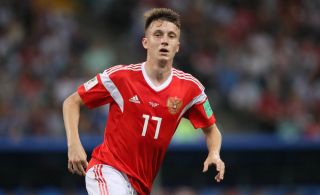 Monaco have announced the signing of Aleksandr Golovin on a five-year deal, the Russia midfielder joining the Ligue 1 side from CSKA Moscow.

Juventus and Chelsea were strongly linked with the 22-year-old, but he has opted to join up with Leonardo Jardim's side in Ligue 1.

Golovin scored one goal and created two more as Russia surprisingly reached the quarter-finals of their home World Cup before losing to Croatia in a penalty shoot-out.

The midfielder boosted his reputation with a series of strong showings throughout the tournament and was subsequently linked with a lucrative switch to Premier League giants Chelsea and Serie A champions Juventus.

Monaco vice-president Vadim Vasilyev suggested this week his club had won the race for Golovin and the deal, reported to be worth around €30million, was completed on Friday.