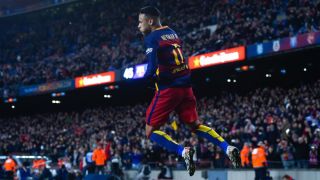 Neymar has committed his future to La Liga champions Barcelona by signing a new deal until 2021.

The Brazil captain has been a huge success since moving to Camp Nou from Santos ahead of the 2013-14 season, and netted 31 goals as Barca completed a Liga and Copa del Rey double last season.

There had been increasing speculation during the close-season that the likes of Manchester United, Paris Saint-Germain and Real Madrid were all willing to meet Neymar's release clause and prize away one of Barca's key assets.

However, Barca always maintained that Neymar was going nowhere and the Catalan giants confirmed on Friday he has penned a contract extension.

Since moving to Barca, Neymar has formed a devastating triumvirate with Lionel Messi and Luis Suarez, with the trio dubbed 'MSN'.

Neymar helped Barca to a Liga, Copa and Champions League treble in 2014-15, but faced criticism at times last term over a perceived dip in form.

However, he remains an integral part of Barca's devastating attack and news of his fresh deal is a huge boost to Luis Enrique's squad.