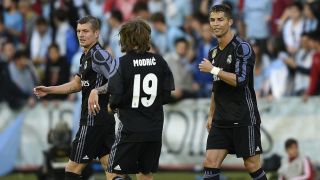 Real Madrid have won their first La Liga title for five seasons, sealing glory with a 2-0 win at Malaga.

Zinedine Zidane's Champions League finalists went into the final day of the season needing a point at La Rosaleda to oust bitter rivals Barcelona as champions.

In the end they did more than enough as goals from Cristiano Ronaldo and Karim Benzema secured a 29th win of the top-flight campaign.

Overall, Madrid extended their all-time record for La Liga wins to 33 and it is a success that checks Barcelona's recent dominance of the competition.

Madrid now have two La Liga triumphs over the past nine seasons, set alongside six for Barca and Atletico Madrid's surprise march to glory in 2013-14.

Zidane's men will now attempt to become the first team in the Champions League era to retain their European crown when they face Juventus in Cardiff on June 3.

Victory in Malaga also stretched their ongoing club record of scoring in consecutive games, going back to April last year, to 64 matches.