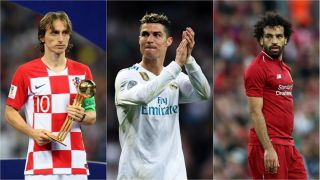 But there is no place for Barcelona and Argentina superstar Lionel Messi.

Modric was also pivotal to that success before inspiring Croatia's run to the World Cup final.

Salah did not enjoy such a productive time in Russia, as Egypt bowed out at the group stage, but swept the board in terms of individual awards in England after a magnificent debut season for Champions League finalists Liverpool.

Like Ronaldo, Salah netted 44 times across all competitions for Jurgen Klopp's men.