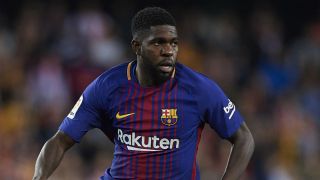 Samuel Umtiti is facing up to eight weeks out of action and will miss December's Clasico clash with Real Madrid after suffering a hamstring injury in Saturday's draw with Celta Vigo.

The France international pulled up in the second half when chasing Iago Aspas in the build-up to the visitors' second goal and immediately signalled to be substituted.

Barca sent the player for tests and have since confirmed he has a muscle injury that will keep him sidelined until the new year.

"The draw between Barca and Celta has left some bad news in the form of an injury," the club said in a statement.

"Tests carried out have confirmed that first-team player Samuel Umtiti has an injury to the femoral biceps of his right hamstring.

"The approximate time out is eight weeks."

The centre-back is therefore set to miss at least all of Barca's games before the winter break, which include a Champions League clash with Sporting CP as well as league meetings with Villarreal, Deportivo La Coruna and Madrid on December 23.

The club will hope to have him available for the derby with Espanyol on February 3.