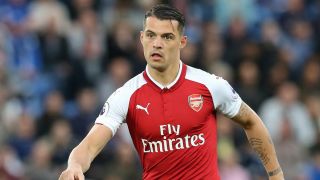 Arsenal have announced midfielder Granit Xhaka has committed his future to the Premier League club by signing a new "long-term" contract.

Switzerland international Xhaka featured in all 38 Premier League games in the 2017-18 season, starting 37 and making a single appearance off the bench.

And Arsenal confirmed on Friday that Xhaka has agreed to extend his stay at Emirates Stadium, although the length of his contract remains undisclosed.

"Hi Gunners, it's Granit, I'm happy and proud to sign a new contract here for Arsenal," Xhaka said in a video message posted on social media. I hope for good results in the future."

Xhaka shook off an injury scare before the World Cup and is set to be involved for Switzerland in their opening Russia 2018 clash with Brazil on Sunday.

Arsenal's new head coach Unai Emery, who has replaced Arsene Wenger at the club, is looking forward to working with the 25-year-old midfielder.

"I'm delighted that Granit has extended his contract with us," Emery told Arsenal's website.

"He's an important member of the squad and is still young so will be able to develop even more.

"I hope he has a successful World Cup with Switzerland and comes back fit and ready for the new season."