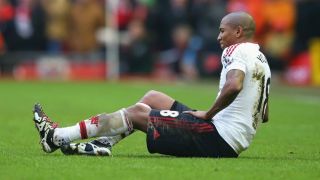 Manchester United winger Ashley Young faces "a long time" on the sidelines as he requires surgery on a groin injury, Louis van Gaal has confirmed.

The 30-year-old, who has regularly been deployed at full-back under Van Gaal this season, was forced off after 42 minutes of the 1-0 win at Anfield following a challenge with James Milner.

Van Gaal has now told MUTV that Young's injury is more severe than first thought and he will require an operation which will keep him out for a considerable length of time.

The news comes as a blow to United given that left-back Luke Shaw is still recovering from a broken leg and Marcos Rojo has yet to return following a shoulder injury.

Van Gaal also confirmed that Phil Jones and Bastian Schweinsteiger will miss Saturday's game with Southampton as they have failed to regain full fitness, though Adnan Januzaj could return to the matchday squad