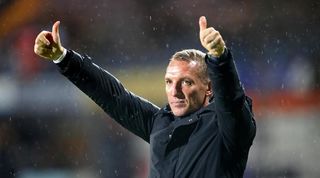 Guardiola is currently in his fourth season in charge at the Etihad Stadium and has never spent longer than four campaigns at a single club.

The Catalan is under contract until summer 2021 but is not expected to remain at the helm for the long-term.

And after Leicester’s incredible 9-0 thrashing of Southampton on Friday, Neville believes Rodgers should be in the running to take over at City.

“If you look at what he achieved at Liverpool, then at Celtic, and what he is now doing at Leicester, we always talk about foreign coaches having philosophies and values and Rodgers improves teams, plays good football and he is quite innovative,” he told Sky Sports.

"He does seem to be a great coach in terms of the players enjoying working with him and I am asking the question now of why he wouldn't be seen as one of the next big coaches of one of the big clubs.

“You look at Manchester City appointing Pep Guardiola, you probably won't see Rodgers' name linked with that job because people will be thinking of someone else, but why not?

"Look at what he has done in terms of the football he plays, the improvement he has on players and working with them on the pitch.

"Ultimately, from Brendan Rodgers' point of view, if he gets into the top four this season, he has to be looking at the very top jobs in English football.”