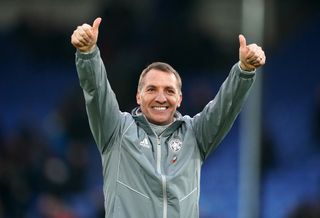 They host Aston Villa in the semi-final first leg on Wednesday as overwhelming favourites to make it to Wembley.

The Foxes last won the League Cup in 2000 when they beat Tranmere 2-1.

It remains their last major final having reached the League Cup showpiece in 1997 and 1999, winning one and losing the other.

And, despite a shock Premier League title in 2016, Rodgers wants some fresh memories.

“I’m aware the club hasn’t been to a final for 20 years so let’s get there then,” he said.

“Let’s not be worried too much about the past. Let’s create this new history but we know we’re going to have to play well to get there.

“It’s always nice when you have something tangible to show for your progress.

“The players have been amazing so if you can do that it would be great. You can still do some great work as a team and as a club and not win but our ambition is to win.

“Any team that wins anything you have to move onto the next focus and target.”

Daniel Amartey is out with an ankle injury while Wes Morgan is sidelined with a groin problem after coming off in the 2-0 FA Cup win over Wigan on Saturday.

Jamie Vardy (calf) is fit and Filip Benkovic is available despite suffering a knee injury at the weekend.

Rodgers is expected to name a strong side as they look for a first-leg advantage.

He added: “It’s important to stay calm, you don’t need to magnify the importance of the game. Every game you go into you go with the intent to be aggressive, playing well and winning.

“It’s the same preparation, very calm, full of details and how can we exploit any weaknesses Aston Villa may have.”

Meanwhile, Rodgers insisted there is no change in James Maddison’s contract situation with talks continuing over a new deal.

“It’s just ongoing. James is a player we are keen to keep here and help us on this journey,” he said, with Maddison linked to Manchester United. “James and his reps are speaking with the club which is great.

“These things take time but his level has not dropped. He is playing at a really high level.”