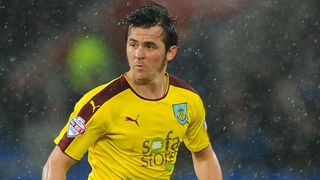 A three-goal blitz in 27 first-half minutes paved the way for Burnley to beat Brentford 3-1 at Griffin Park and bolster their automatic promotion hopes in the Championship.

Fresh from a 5-0 victory at MK Dons on Tuesday, Sean Dyche's men turned in another impressive away performance to haul themselves to within a point of third-placed Derby County, who are next up for Burnley at Turf Moor.

The visitors dominated the opening exchanges and went ahead after 12 minutes when Scott Arfield brilliantly curled a lay-off from former Brentford striker Andre Gray into the top corner from just outside the box.

If the opener was impressive, Burnley's second came in even more sumptuous style - Joey Barton nonchalantly clipping home a free-kick via the inside of the post to follow up his first goal for the club in midweek.

It was 3-0 when George Boyd lashed a volley beyond goalkeeper David Button from 18 yards to compound a miserable opening 45 minutes for Brentford, who were dealt a pre-match blow when defender James Tarkowski refused to play against the club who have been strongly linked with him in recent weeks.

Alan Judge – another reported transfer target for Burnley – pulled one back, jinking in from the left wing and firing a low shot across Tom Heaton before the hour.

Defeat for Brentford made it four in succession, while Burnley basked in a third away win in the space of seven days, having dumped Middlesbrough out of the FA Cup last weekend.