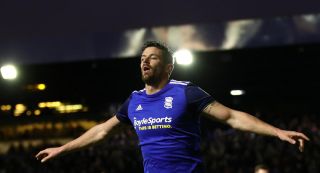 The Bees earned a point thanks to Ethan Pinnock’s first goal for the club to cancel out Lukas Jutkiewicz’s 12th goal of the season for Blues.

The draw extended Birmingham’s unbeaten run to 10 games in all competitions.

The 16-year-old, a £30million target for Chelsea and Manchester United, cut inside and his 20-yard curler beat the dive of David Raya and rebounded off the post.

Gary Gardner’s low cross was dummied by former Brentford striker Scott Hogan at the near post and Jutkiewicz supplied a neat finish.

But Brentford needed only four minutes to level through Pinnock’s first goal for the club.

Emiliano Marcondes floated in a deep corner and nobody picked up the centre-back who headed in at the far post.

Blues hit back and Raya tipped away Marc Roberts’ header but the hosts needed a fine save from Lee Camp to deny Ollie Watkins his 21st goal of the campaign.

Watkins ran onto a through ball from Marcondes but saw his shot bravely blocked by the ever alert Camp who raced out to narrow the angle.

Brentford looked to turn the screw in the final stages but Camp again excelled to keep out Marcondes’ fierce effort.

Pinnock was almost the villain in the closing minutes when he appeared to handle in the box but referee Stephen Martin was unmoved.