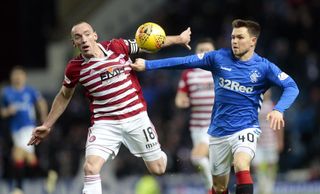 Hamilton manager Brian Rice praised “leader” Darian MacKinnon after his captain made a landmark 250th appearance for the Lanarkshire club at neighbours Airdrie.

Midfielder MacKinnon marked his big day with a derby win as Hamilton came from two goals behind to book their place in the last 16 of the Betfred Cup.

Rice said: “Darian is my leader in that dressing room, and he’s a leader everyday at this club. You always know what you’re getting with him.

“Good, bad or indifferent, I know that I’ll always get 100 per cent full commitment.

“And great credit to him, because he is in there on merit. He knows that he needs to work hard to stay in as there are young lads waiting for their chance.”

Rice was relieved as Accies progressed to the next stage of the League Cup – but his team made hard work against their League One rivals.

Airdrie went 2-0 up through goals from Callum Smith and Ally Roy.

But Accies turned it around after the break, first through midfielder Ross Cunningham’s double from the penalty spot before Marios Ogkmpoe hit a stunning 89th-minute winner.

It was midfielder Cunningham’s fourth in a week, after his double against Partick Thistle last weekend.

Rice added: “Fair play to young Ross, he’s had the courage to step up and take both penalties. They were big moments in the game.”