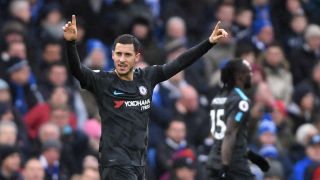 Antonio Conte's men had been held to five consecutive draws – three games ending goalless – in all competitions, needing a penalty shootout to get past Norwich City in the FA Cup on Wednesday.

Progress to the fourth round came at a price, with forwards Alvaro Morata and Pedro receiving red cards, but Hazard and Willian made light of their absence with goals inside the first six minutes – the Brazilian's eighth of the campaign certainly one to trouble the end-of-season lists.

To their credit, Brighton did not buckle. Ezequiel Schelotto was unfortunate to have penalty claims rejected and Davy Propper hit the post after half-time.

Willian came similarly close to his second before turning provider on his 50th consecutive Premier League appearance for Hazard.

Victor Moses added gloss to the scoreline in the 89th minute as the reigning champions moved up to third in the table.

Brighton boss Chris Hughton sought to match up Chelsea by switching to a 3-5-2 formation – a decision that instantly looked regrettable amid a rampant opening from the visitors.

Willian and Moses both asked questions down the Albion left and Dale Stephens only partially cut out the latter's cross, meaning the ball rolled kindly for Hazard to lash home the 100th league goal of his career.

Brighton's heads were yet to clear when a dazzling second arrived, with Willian scything towards a ragged backline before being audaciously set up for an emphatic finish by twin backheels from Hazard and Michy Batshuayi.

Such a healthy early advantage meant Chelsea could absorb an erratic showing from Willy Caballero, who deputised in goal for the injured Thibaut Courtois.

The former Manchester City goalkeeper was fortunate not to be penalised when he raced off his line and appeared to trip Schelotto in the box, while offside spared him after unconvincingly challenging Shane Duffy at a 20th-minute corner.

Any encouragement for Brighton was generally punctured by the irresistible Hazard, who strode forward to play in Willian once more, with Mat Ryan saving well at his near post.

The Australia international also denied Batshuayi before Caballero displayed astonishing reactions to keep out Tomer Hemed's 30th-minute header at the other end.

Schelotto had another penalty claim waved away when he tangled with Tiemoue Bakayoko, earning a booking for his protests, while Hazard displayed rare misjudgement when he floated the ball between Moses and Ryan's far post on the stroke of half-time.

Chelsea centre-back Andreas Christensen suffered a nasty clash of heads with Duffy early in the second half and was still regaining position after receiving treatment when Propper nodded Schelotto's cross against the post.

A buccaneering run from Hazard was halted illegally by Duffy, booked for his troubles, and a combination of Ryan and his left-hand post kept out Willian's resulting free-kick.

Schelotto's all-action outing continued when he capitalised upon hesitation from Marcos Alonso but was unable to prod past Caballero.

Goals remain elusive for Brighton and this was their 13th shutout of the campaign, something recording signing Jurgen Locadia – looking on from the stands after his arrival from PSV – will hope to remedy.

Chelsea had long forgotten such problems by the time Willian's wonderful pass sent Hazard scampering towards an embattled defence to unleash another fine finish.

On the heels of that familiar combination, 21-year-old substitute Charly Musonda gave a nod towards Chelsea's next generation when his fine lofted ball unleashed Moses for a first Premier League goal in 14 months.