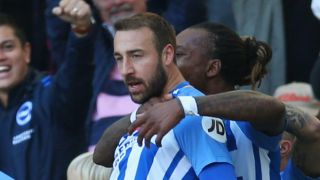 Glenn Murray scored his third goal in two games to rescue a point for Brighton and Hove Albion as they came from behind to draw 1-1 with Southampton on Sunday.

The veteran striker, who scored twice in Brighton's 3-0 win at West Ham nine days ago, equalised early in the second half of a game of few chances at Amex Stadium.

Southampton took the lead when Steven Davis converted the rebound from a James Ward-Prowse free-kick with a header after seven minutes - only Southampton's ninth Premier League goal of the season.

But after controlling the first half, the Saints were pinned back for much of the second period and manager Mauricio Pellegrino will recognise that his side's failure to increase their lead when they were on top denied them what would have been their second away success of the league campaign.

While Brighton could not find a winner that would have earned them back-to-back top-flight victories for first time since September 1982, Chris Hughton can reflect on another influential performance from Pascal Gross, who contributed his fifth assist of the season when he crossed for Murray to equalise.

Before Brighton could settle into the game, Ward-Prowse hit a curling 25-yard free-kick that struck the woodwork and Davis pounced on the rebound, nodding into the unguarded net from close range.

Hughton's side failed to deliver a quick response and only threatened Southampton's goal for the first time in the 19th minute when Davy Propper tamely headed Anthony Knockaert's cross into the arms of Fraser Forster.

Dusan Tadic should have made it 2-0 after 34 minutes when Sofiane Boufal's pass found him 12 yards from goal with time to pick his spot but he dragged his shot wide of the target and the home crowd breathed a sigh of relief.

Brighton came to life in the last five minutes of the first half and Shane Duffy had the chance to equalise but he headed Knockaert's sweetly struck cross over the bar from point-blank range.

Hughton's half-time team-talk had the desired effect as Brighton dominated from the restart and equalised when Murray rose to meet Gross' floated cross at the far post and headed the ball into the top corner, despite Forster getting a hand to it.

Brighton pushed forward in search of a winning goal and Jose Izquierdo dribbled down the left wing before firing in a shot that might have hit the target had Virgil van Dijk not bravely blocked the angled drive with his chest.

Industrious throughout, Gross carved out a late chance for Knockaert to make it four wins from 10 games for Brighton, but the winger snatched at his shot and the home crowd had to settle for a battling point.