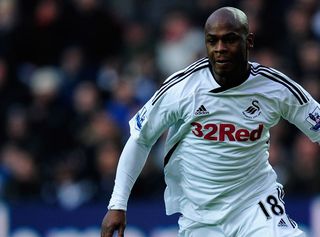 The striker, who has not featured under Michael Laudrup, made his last Swansea appearance in April 2012, when he came off the bench against Bolton Wanderers.

He joins a Brighton who have scored just 11 goals in 11 matches this season.

Leonardo Ulloa is the only Brighton striker to have hit the back of the net this season and manager Oscar Garcia hopes Lita can boost his forward line.

"He is strong, fast, and direct, and he has shown he can score goals in the Championship," the Spaniard told the club's official website.

"He offers us something different going forward."

Lita spent last season on loan at two clubs in the Championship – scoring nine goals in 27 appearances during spells at Birmingham City and Sheffield Wednesday.

He scored nine times during the last campaign but has found himself pushed down the pecking order at the Liberty Stadium with the arrival of Wilfried Bony.