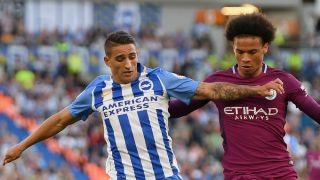 The trio were pivotal members of the side that finished second in the Championship last season to secure promotion to the Premier League for the first time.

Winger Knockaert was named Championship player of the year after scoring 15 goals.

He and defenders Duffy and Dunk all featured as Brighton lost 2-0 to Manchester City in their Premier League opener on Saturday, the latter putting through his own net after Sergio Aguero had given Pep Guardiola's men the lead.

Brighton manager Chris Hughton told the club's website: "Lewis, Shane and Anthony were key members of our promotion-winning side last season, and I fully expect them to be important members of the team once again this season.

"They're relishing the step up to the new level and they each have the capability to perform and excel in the Premier League - and they have certainly earned these new deals with their performances on the pitch.

"It's been a really straightforward process getting everything completed and I'm absolutely delighted that three key members of the squad have committed their futures to the Albion."