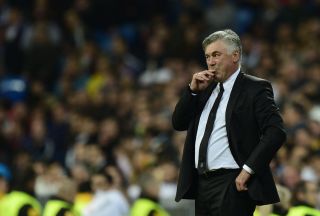 Bale scored twice on his full La Liga debut at the Bernabeu and set up two of Cristiano Ronaldo's three goals in Real Madrid's emphatic 7-3 win over Sevilla.

"Karim (Benzema) played well as his teammates did, however, the most important thing is Bale, Cristiano a Benzema combined very well tonight," Ancelotti said.

"Bale scored and assisted as well and their combination was really good.

"Benzema scored twice and, moreover, he was important in the team play.

"I think all three of them were very dangerous."

Bale scored the first two goals of the evening before Ronaldo slotted a penalty to make it 3-0.

Sevilla hit back with two goals in as many minutes to cut the deficit to 3-2 at the break before Real showed their class in the second half.

"The game has been kind of strange, a little bit crazy," Ancelotti said.

"We had started very well but after we got to 3-0 we lost a little bit of concentration and balance.

"After (half-time) we scored a lot of goals and we have had many good individual performances, but we missed a little bit of balance and we have to work on it because when we're winning 3-0, we should be more careful to avoid problems."