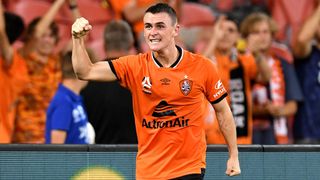 Brisbane Roar stunned Sydney FC with two goals in the final 13 minutes to win 2-1 in the A-League on Friday, with Dylan Wenzel-Halls' late screamer sealing the turnaround.

Sydney looked to have done enough to claim the win which would have taken them into the top two at least until Sunday, but Roar showed remarkable character to comeback and secure their second win of the season.

An even first half was just about shaded by the visitors, who went close to the breakthrough in the 23rd minute, but Danny De Silva's first-time effort came back off the post.

Roar were forced into a change soon after due to an injury to Jack Hingert, and 16-year-old Izaack Powell came on in his place to become the club's youngest ever player.

Sydney eventually took the lead early in the second half – De Silva finding the target on this occasion, burying from six yards after a shot had been parried through Powell's legs.

But Brisbane roared back – Tobias Mikkelsen emphatically beating Andrew Redmayne after being released into the area in the 77th minute.

And Wenzel-Halls completed the turnaround in the last minute, meeting a loose ball on the edge of the box and blasting a ferocious half-volley into the top-right corner.

What a turnaround!@brisbaneroar secure their first win since Round 5! #ALeague#BRIvSYD#PlayFootballpic.twitter.com/2KadpO8por— Hyundai A-League (@ALeague) February 8, 2019