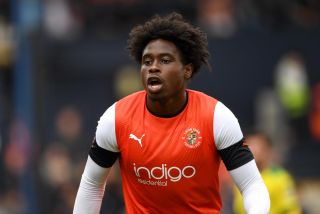 Luton ended Bristol City’s unbeaten run on the road this season with a 3-0 victory at Kenilworth Road.

Second-half strikes from Pelly Ruddock and Harry Cornick, plus an Ashley Williams own goal, ensured the Hatters condemned City to their first loss since the opening day of the season.

City went close early on as Tommy Rowe’s low shot from outside the box was parried by recalled goalkeeper James Shea, with Town just about clearing the rebound behind.

Rowe then sliced over under pressure from Shea after beating the offside trap.

Luton almost had the lead with their first attempt as James Collins’ effort from a low Dan Potts cross deflected narrowly wide.

Town were then denied by the post, Izzy Brown’s thunderbolt superbly tipped on to the woodwork by Bentley.

Andreas Weimann chipped narrowly wide after getting clear of the hosts’ defence, before Luton almost had the lead just before half-time. Ruddock’s low effort was well saved by Bentley at full stretch.

In the second half, Collins volleyed a presentable opportunity over the bar from a corner after Sonny Bradley won a header at the back post.

Luton then took the lead with 56 minutes on the clock in brilliant style when midfielder Ruddock curled a sublime effort beyond Bentley and into the top corner for his first goal of the season.

The second swiftly followed, Brown sending Cornick away and he beat the offside trap and then
Bentley to make it 2-0 after 62 minutes.

City threw on recent signing Rodri, who had played for Sevilla earlier in his career, and the Spaniard nearly scored with virtually his first touch, but Shea made a magnificent fingertip save to turn his glancing header on to the post.

Luton almost had a third in the 73rd minute as Cornick and Brown combined for Collins, who was denied by Bentley’s legs.

With time running, Rodri did have the ball in the net, turning home from close range, but the offside flag was up, while he whistled another effort wide as Luton kept a first clean sheet of the season.

The Hatters added the icing on the cake in stoppage time as well, breaking with pace from a visiting attack. Tunnicliffe motored down the left and his cross was diverted past Bentley by City defender Williams to complete a miserable afternoon for the Robins.