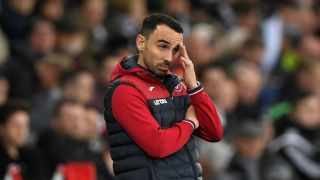 Leon Britton believes January signings can help to lift Swansea City away from the bottom of the Premier League.

A 5-0 Boxing Day defeat at Liverpool left Swansea winless in four league games and five points away from safety.

With Britton in temporary charge following the departure of head coach Paul Clement, the club icon called for another influx of signings to aid Swansea's battle against relegation.

"We have January coming up," Britton said. "I am sure there will be some fresh faces coming in and we need that.

"Last January, the club brought some players in who gave us a big boost in the second half of last season and doing something similar will be important this year.

"We have to try to lift the place by bringing some fresh faces into the squad."

And ahead of Saturday's trip to Watford, Britton called for his squad to put in an improved performance.

"We want some new faces, but it's also down to the players we have now to get us out of it," Britton added.

"The majority of them were here last year when we managed to survive and we now have to do the same again."