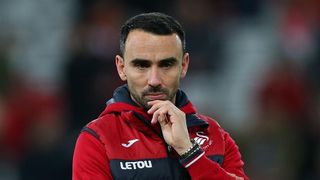 Leon Britton hopes to guide Swansea City to Premier League safety from the pitch after stepping back from his recent sojourn into coaching at the Liberty Stadium.

The midfielder – who is currently nursing a calf injury - stepped into the breach as a player-assistant coach under Paul Clement when Claude Makelele left to take over at Belgian side Eupen.

When Clement was dismissed by the rock-bottom Swans, Britton was then tasked with leading the first team against Crystal Palace and Liverpool.

He earned a point in the home clash with Palace before Christmas, but was on the receiving end of a 5-0 thrashing by Jurgen Klopp's Reds on Boxing Day.

Swansea turned to Carlos Carvalhal on Thursday and rather than be part of the Portuguese's backroom staff, Britton is determined to make an impact on the pitch.

"In fairness to the manager and chairman, they offered me the opportunity to stay as part of the new coaching set-up," Britton told the club's official website.

"They left the decision entirely down to me, and I had to decide whether I wanted to be a coach or a player.

"I thought long and hard about it and while I enjoyed the coaching experience and learnt a lot in a short space of time, I still feel I can have a positive impact on the pitch as a player. I think that will be more beneficial to the club at this stage of the season.

"I am not ready to retire as a player yet, so I will review things again at the end of the season."

Carvalhal has named Joao Mario and Bruno Lage as his coaches, with Jhony Conceicao and Paulo Sampaio joining as analysts – the latter three having been part of his team at Sheffield Wednesday.