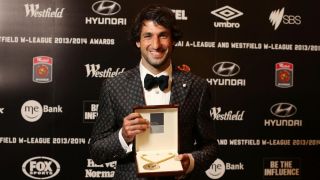 The German midfielder, 33, was acclaimed the A-League best player at the FFA's 2013/14 awards night at Royal Randwick Racecourse in Sydney and was a clear winner with 506 votes ahead of closest rival James Troisi (290 votes) then followed by Luke Brattan (264 votes), Adam Taggart (243 votes) and Marcelo Carrusca (226 votes).

Adelaide United's Eugene Galekovic collected the Goalkeeper of the Year Award for the third time.

Newcastle Jets striker Adam Taggart picked up a double himself claiming the Young Footballer of the Year Award and the Golden Boot Award as the A-League top goal scorer.

Brisbane Roar Head Coach Mike Mulvey was Coach of the Year Award after guiding his team to the Premiers' Plate.

Melbourne Heart midfielder Orlando Engelaar received the Goal of the Year Award for his Round 24 long range effort against Central Coast Mariners.

On a glittering night for the Roar, Tameka Butt doubled the delight by taking out the Westfield W-League's highest honour, the Julie Dolan Medal, and Brandon Borrello completed Brisbane Roar's hat-trick of the top awards by claiming the National Youth League Player of the Year Award.