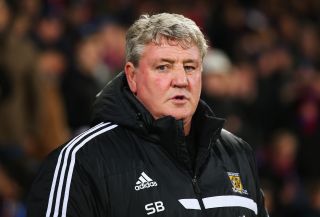 Bruce takes Hull to the Amex Stadium on Monday with Wembley on his mind after seeing Swansea City and Wigan Athletic taste glory in the domestic cup competitions last season.

And with a home quarter-final tie against his former club Sunderland in the offing, Bruce has allowed himself to think about once again lifting the trophy he won three times as a player.

"The big games are around the corner and there's nothing quite like an FA Cup quarter or semi-final. I think once you get to this stage of the cup it's different," he said.

"If we can get past Brighton then all of a sudden you're in the quarter-finals and it starts to get tasty and exciting.

"As we saw with Swansea in the League Cup and Wigan in the FA Cup, anything is possible in these competitions.

"You win five games and you've won the cup. So let's get past Brighton and have a good run."

Hull have only reached the last eight of the FA Cup five times in their history, with their best ever campaign coming way back in 1930, when they got to the semi-finals.