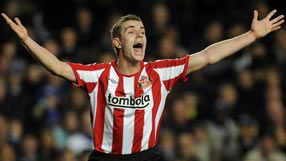 City officials are believed to be preparing a £20-million package for the 20-year-old, who is set to be handed his international debut when England take on France at Wembley on Wednesday.

But Red Devils supremo Sir Alex Ferguson has been monitoring the form of the Sunderland-born prodigy, after impressing during the Black Cats' 2-2 at Old Trafford last season, three months after Henderson turned 19.

And former United captain and Sunderland boss Steve Bruce admits he is fearing the day that one of the big clubs come calling with a mega-money offer for his young starlet.

"I sincerely hope we can keep him in the long term. We will try desperately. I am a realist. If one of the big giants come along we will be up against it. If ridiculous money is offered it will be difficult. We will face that if it comes,” Bruce said, according to The Mirror.

"He is a young lad with the world at his feet, the sky's the limit for him. Jordan has everything. He can run, tackle, he never gives the ball away, and I rate him as the brightest young prospect in the British game.

"He just wants to play football, on top of him being a great athlete, two-footed, big, and a good footballer. His family and myself will ensure that stays. But it comes naturally to him, it is refreshing.

"He's had two or three contracts during his rise but it has not mattered a jot to him. If he keeps progressing he will be an England player for a long time.

"He is a modern day player, is constantly at 13km of running per match. And he has a spot-on attitude, which in this age is quite refreshing. He is only 20, but if you are good enough, you are old enough."

Bruce also confessed to having a conversation with his Blackburn counterpart Sam Allardyce, who is also struggling to fend off interest from bigger clubs for his young centre-back Phil Jones.

"I have just been speaking to Big Sam, who has Phil Jones, another huge talent, who has done well. It is part and parcel that other clubs will have a look. Ultimately we will have to face it and we will have to cope with that when it comes."

Ferguson has been linked with a string of midfielders - including Henderson, Everton's Jack Rodwell and Inter Milan playmaker Wesley Sneijder - as replacements for Paul Scholes, who could leave the club as early as next summer.

Fellow midfielder Ryan Giggs, 36, is also approaching the end of an illustrious career that has amassed almost 600 league appearances in a Manchester United shirt.